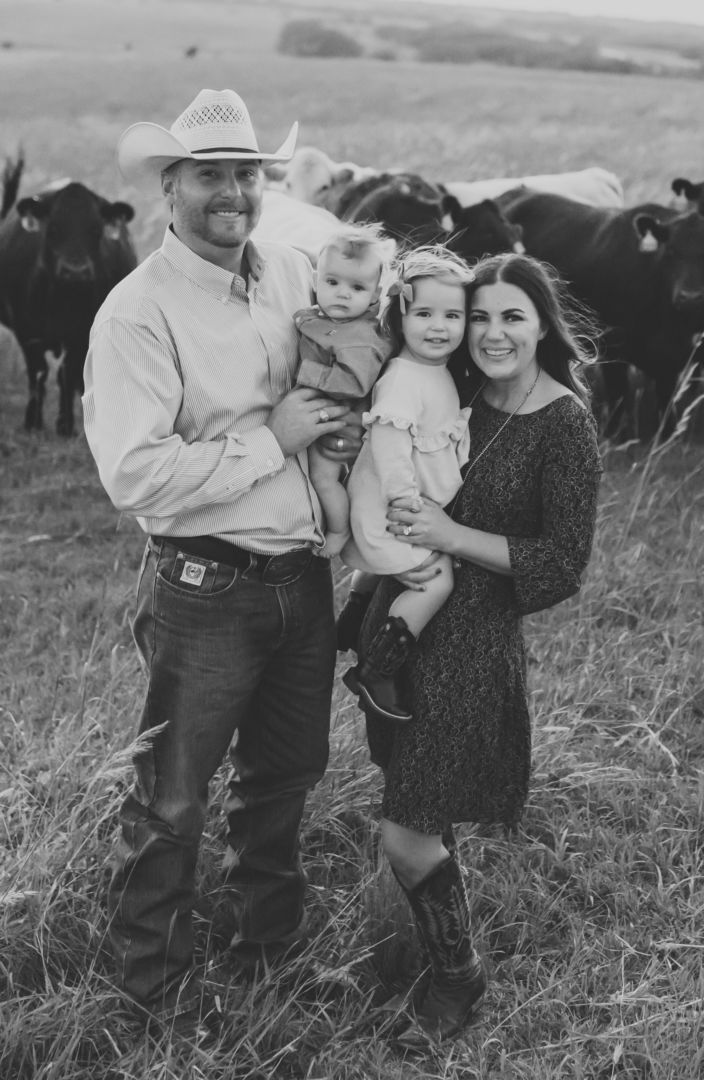 Cody Cattle Company (CCC) is a purebred Charolais ranch owned and operated by the Cody and Lindsay Runft family. CCC markets yearling and 18-month-old bulls in the spring through the annual Black and White Sale, as well as a select number of females private treaty.

Cody was raised on the Runft Charolais Ranch (RCR) in north-central Kansas. There, he established his love of the Charolais breed as a third-generation Charolais cattleman. With RCR genetics as the foundation, and a dream of one day selling white bulls to commercial cattlemen, CCC was founded.

Lindsay grew up in south-central Kansas, a fifth generation in her family’s farming and stocker cattle operation. Her earliest, and most fond, childhood memories from the family ranch in Pretty Prairie are learning to ride a horse out on the “big hill” and pushing cattle down dusty dirt roads.

We are located in north-central Kansas, about an hour north of Salina on 36 Highway. We’d love to have you out for a herd tour. Don’t hesitate to call or write! 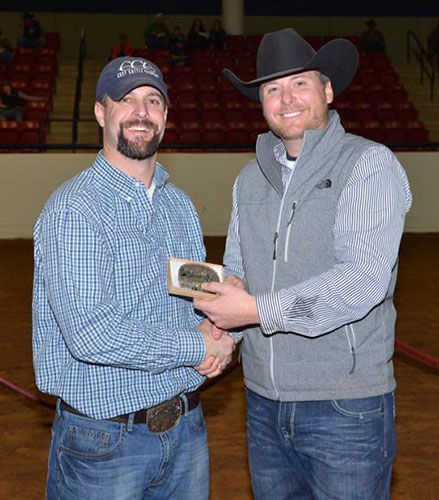 An eye for good cattle and an inherited interest in the Charolais breed have gone full circle for Cody Runft, this year’s recipient of the Ted Kelly Memorial Herdsman of the Year award.

“I don’t know if I ever had a choice or not,” said Runft of his involvement with Charolais cattle. “Grandpa was one of the first to bring Charolais to Kansas in 1956. My dad and uncle owned Runft Charolais Ranch.”

Now, 20 years after purchasing his first Charolais show heifer from the family herd, Runft has plenty of achievements to reflect upon, but none top the honor bestowed on him just prior to selection of the Grand Champion Bull at the 48th National Charolais Show held January 28 in Fort Worth, Texas.

“To me this is the greatest honor you could ever receive because you’re picked by peers and people you look up to,” said Runft. “To have it awarded to me by one of my best friends, Justin Patrick, and having guys like Stan Cross be the first persons to take a swipe out of my hair, it means a lot to me. I respect them all.”

Tradition has past Herdsman of the Year honorees join together in giving the newly tapped Herdsman a haircut following conclusion of the National Show.

“I got the ‘traditional’ haircut,” laughed Runft. “There were 15 past ‘Herdsmen’ there that shaved my head. Unfortunately, I didn’t realize how ugly I was until I got my head shaved! From skin tight it doesn’t grow very fast…gray hairs are coming in!”

“I got my start, probably a little later than some, and showed my first animal when I was 13,” said Runft who grew up in Scandia, Kan. “I started buying a heifer a year from Runft Charolais. Show heifers turned into a cow herd, and the cow herd turned into my passion.

A true ambassador for the breed, Runft is quick to give a litany of reasons why he enjoys breeding Charolais cattle.

“They’re very versatile and can survive environments from Mexico to Canada and on any grass. They make every segment of the industry money!”

“Growing up I probably knew I wanted to be in the Charolais breed. I never had any interest in anything else,” said Runft, who had the ability to ‘pick a good one’ from an early age.”

“G532 – that was my cow. That was the one I picked out of the herd before weaning,” remembered Runft. “Dad said, ‘You win one jackpot show and we’ll go to Junior Nationals’. I won two, but didn’t get to go to Junior Nationals, held that year in Tennessee. Dad decided it was too far away.”

But, G532 was still a good pick. She raised the Reserve National Champion Bull in 2011 – CCC Bud Heavy 903 PLD ET. Through the sale of many progeny, she also impacted the development of Cody Cattle Company.

Then, through his friendship with Chris Peuster, managing partner at Wright Charolais in Richmond, Mo., he met Derry Wright.

“Nine years ago I moved my cattle to Missouri. Derry and I started buying bulls and cows together. It’s been a good partnership from day one,” said Runft. Now, as owner of Cody Cattle Company, and a partner with Wright Charolais, Runft stays busy focusing on the two herds and their customers.

“What I enjoy most is going out and seeing my customers’ cattle and calves out of my bulls,” said Runft. “I like to see how they’re working for them. I love herd visits.”

But Runft is quick to attribute successes for both programs to a team effort. Recently married to Lindsay Graber on Oct. 1, 2016, he credits this new partnership and the entire crew at Wright Charolais for the “cussin’ and discussion” that leads to success.

Putting emphasis on breeding functional, sound and fertile cattle, Runft says, “Feet and legs are very important. We want bulls that are rugged, massive and durable, and look to udder quality and femininity for our females.”

While focusing on selling bulls to commercial cattlemen, the crew also likes to be competitive, typically making appearances at the American Royal, the National Western, the National Charolais Show and the Missouri State Fair, “because it’s in our backyard.”

But when you get to do the things you love, every day is a good day. Show successes and honors aside, “we take it one day at a time, doing what needs to be done,” said Runft. “Right now, we’re getting ready to sell 160 white bulls on March 11.”

As published in the March 2017 edition of the Charolais Journal.